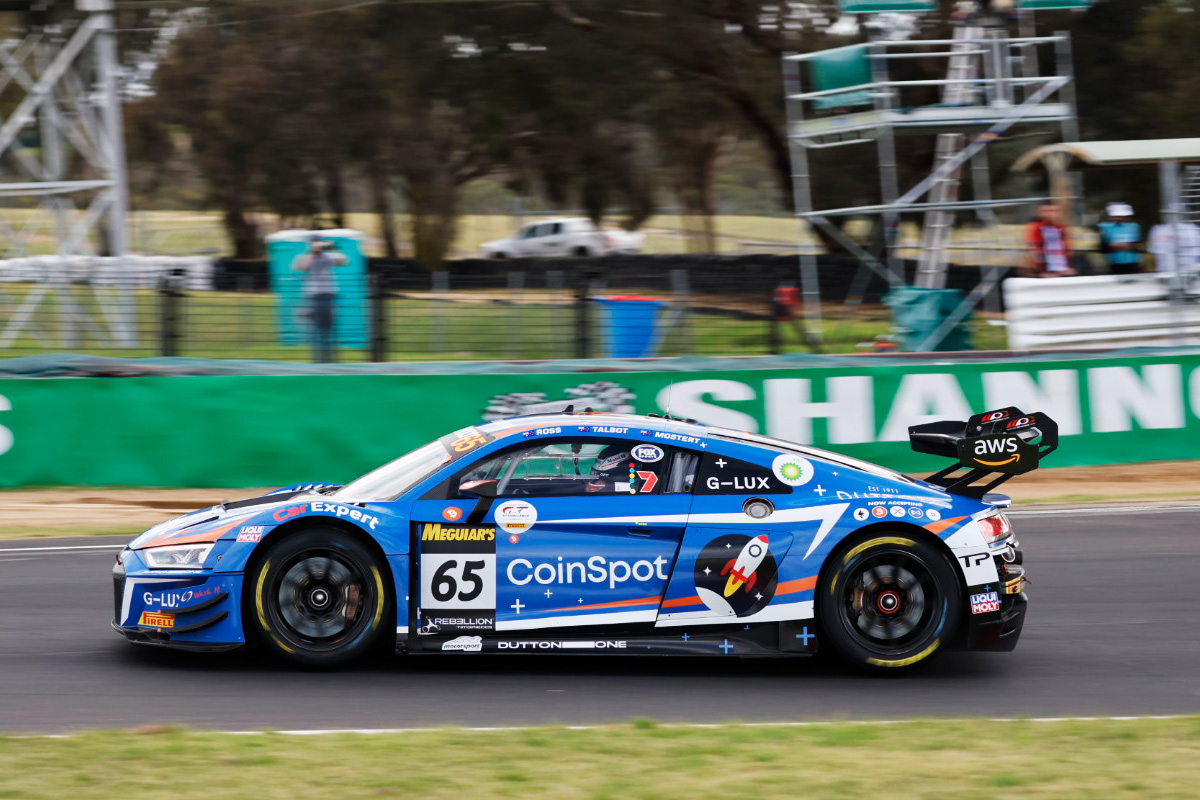 The introduction of aggregate qualifying saw increased importance placed on the pace of amateur competitors, with each car’s fastest time from the first (dedicated to Bronze-rated drivers) and second (all drivers) sessions combined.

Liam Talbot (#65 Audi) aced Qualifying 1 with a 2:05.5296s, although he did get some help from a stoppage caused by Yasser Shahin’s spin at Murray’s Corner.

Brad Schumacher (#74 Audi) had been on a quick lap, only to have the session halted moments before he crossed the start/finish line.

That put the Mostert/Fraser Ross/Talbot combination in the box seat, while the #888 Mercedes-AMG was left with work to do given Prince Jefri Ibrahim was just 12th and effectively six tenths out of the provisional top 10.

Red flags quickly returned in Q2 when Will Brown beached his #19 Mercedes-AMG at Hell Corner, and there would only be a relatively small window of opportunity before Eric Constantindis spun on the climb up The Mountain to draw another session to an early end.

That left Mostert with a decisive 0.3368s advantage over Kelvin van der Linde, whose #74 squad was left to rue the timing of the Q1 red flag.

Ricardo Feller (#777 Audi) and Jules Gounon (#75 Mercedes-AMG) were next, with the underdog of the day being the #45 Am entry which qualified fifth thanks to the efforts of Garth Walden and Brett Hobson.

Shane van Gisbergen (#888 Mercedes-AMG) and Lee Holdsworth (#9 Audi) salvaged Top 10 Shootout berths having sat outside the bubble prior to Q2, while the #24 Audi was the major casualty.

Tony Bates had been sixth in the opening stanza, but David Reynolds was unable to manage a representative lap time in Q2 between the various stoppages.

With positions 11th onwards now locked in, the #24 will start 16th. Brown did get back out on track to recover to 11th.

It appears four cars will start tomorrow’s race from the pit lane.

The Supabarn Audi which competed in both segments of qualifying was always due to have its times scratched following a crash-induced car swap.

Team BRM’s Audi did not make it out for Q1 after Mark Rosser’s Practice 5 incident, and tried in vain to get Nick Percat some shakedown laps in Q2.

The #95 MARC II V8 also failed to take part in qualifying for a reason which is not yet clear, while Craft Bamboo Racing was sidelined due to an engine change.

The Top 10 Shootout, which will run to a revised format per a late change, will kick off at 16:10 AEST this afternoon, setting the starting order at the front of the grid for tomorrow’s race which gets underway at 05:15 AEST.