Skip to content
You are here
Home > NHL > Panthers win first playoff round since 1996, Rangers and Stars force Game 7s

Who was the guy? Hoo boy, Mika Zibanejad was all over the place. In order, he —

•  Scored the Rangers’ first goal on a power-play one-timer off a faceoff.
•  Scored their second goal on a rocket from the top of the circles, tying the game at 2-2.
•  Came within a missed crossbar of a hat trick after a post-penalty box breakaway.
•  Put a puck on Louis Domingue that Chris Kreider sent home to put the Rangers up 3-2.
•  Dropped a pass to Kreider, then went to the net front for Kreider’s shot — which handcuffed Domingue from six feet inside the blue line and put the Rangers up 4-3 with 88 seconds remaining.

That’s a night, and it was a major uptick in productivity from the first five games of the series. Sidney Crosby’s absence helped — it’s easier to score goals when you have the puck — as did the ongoing presence of Domingue, who’s been shaky to disastrous since the moment he entered the series, but the sheer variety of scenarios in which Zibanejad made a difference are impossible to ignore. The Rangers were going to need a game like this from his line at some point. There it was.

Plus, he and Kreider gave us one of the most relatable moments of the postseason so far, after Zibanejad went in for an iPad review of his blown breakaway.

Zibanejad looks at the tablet to see his breakaway miss and Kreider just throws it away 😂 pic.twitter.com/zklGR3ZMwn

The lessons there? Not every mistake needs next-level thought — sometimes, we just screw up — and it always helps to have a friend to tell you stop looking at your phone.

What was the key? The longer Domingue was in the lineup, the likelier a performance like this one would occur. That was a catastrophically bad performance. The Rangers had 2.81 expected goals, and Domingue allowed four — but that doesn’t account enough for just how ridiculous the last one was.

Beyond that, though, Evan Rodrigues’ retaliatory penalty on Ryan Lindgren five minutes into the second period was the start of something bad for Pittsburgh. Zibanejad’s first goal came five seconds later. It was a selfish penalty by Rodrigues — Mike Sullivan would’ve shot eyeball lasers toward the box if he could’ve — that was magnified by Domingue’s issues. From there, the vibe shift was on.

Key stat: Zero. That’s how many shots the Penguins attempted during 1:07 of five-on-three time with the game tied 2-2. New York won the special-teams battle decisively (two PP goals on three chances, 3-for-3 on the penalty kill).

The moment it was over: A Rangers win felt inevitable for the last 26:21, once the game was tied 2-2, but it wasn’t well and truly over until Kreider’s shot popped over Domingue’s head. Thus is the peril of starting an AHL goalie.

The moment of the game: Other than the iPad toss? Other than Rodrigues’ penalty? Other than the Rangers’ fourth goal? Zibanejad’s game-tying goal. Pittsburgh had blown a 2-0 lead for the second consecutive game.

Rangers worry meter: 😬😬😬 … Igor Shesterkin didn’t look like a Hart finalist (31 saves on 34 shots), but he was competent. Depending on his opponent in Game 7, that should be enough. Maybe he’ll pull off another nasty stretch pass.

Zibanejad shoots, Kreider scores off the rebound. But look at this goalie stretch pass from Shesterkin for the secondary helper #NYR pic.twitter.com/XgYTDS8JZo

Penguins worry meter: 🤯🤯🤯🤯🤯 … Only one team in the series has blown a 3-1 lead, and it ain’t the Rangers. If Tristan Jarry isn’t back in net, the collapse will probably be complete.

Who was the guy?: Who else, but Carter Verhaeghe? Not only did he have the secondary assist on Claude Giroux’s game-tying goal, but he scored the series-clinching goal in overtime to send the Panthers to the second round for the first time since 1996. He’s been clutch for this team all series, now with six goals and six assists for 12 points in six games.

Talk about a value signing for the Panthers, after inking a two-year contract for $1 million, on average, in October 2020. Florida benefited from his breakout season last year, another solid performance in 2021-22, and now this performance to open the playoffs. He’s a prime of example of why it helped to have some innovative, data-driven thinkers in the front office at the time of the signing to find those market inefficiencies and spot gems like Verhaeghe.

What was the key?: The Panthers haven’t been the same dominant force that they were in the regular season. Washington did their best to stop this team off the rush and limit their goaltenders from having to face those dangerous chances. So to move on to Round 2, Florida needed their “big guns” to come to play. And that’s exactly what they got from the likes of Aleksander Barkov, who scored the go-ahead goal in the third period, as well as Claude Giroux, who set up both Barkov’s third-period score and Verhaeghe’s in overtime, in addition to tallying the game-tying goal to make it 2-2.

Key stat: Three game-winning goals. That’s how many Verhaeghe had for his team this series — so he had a direct impact on three out of the four wins they needed to advance.

The moment it was over: In an overtime game … it’s always the game winner. This game wasn’t over till it was over, seeing as the Capitals tied it with just 63 seconds left. Giroux was below the goal line and found Verhaeghe, who received the pass from the slot and finished with a backhander to end the series.

The moment of the game: Florida was 63 seconds away from winning Round 1 in regulation, before T.J, Oshie scored a semi-chaotic goal to knot this at 3-3.

I mean, where was Sergei Bobrovsky when the goal was actually scored? 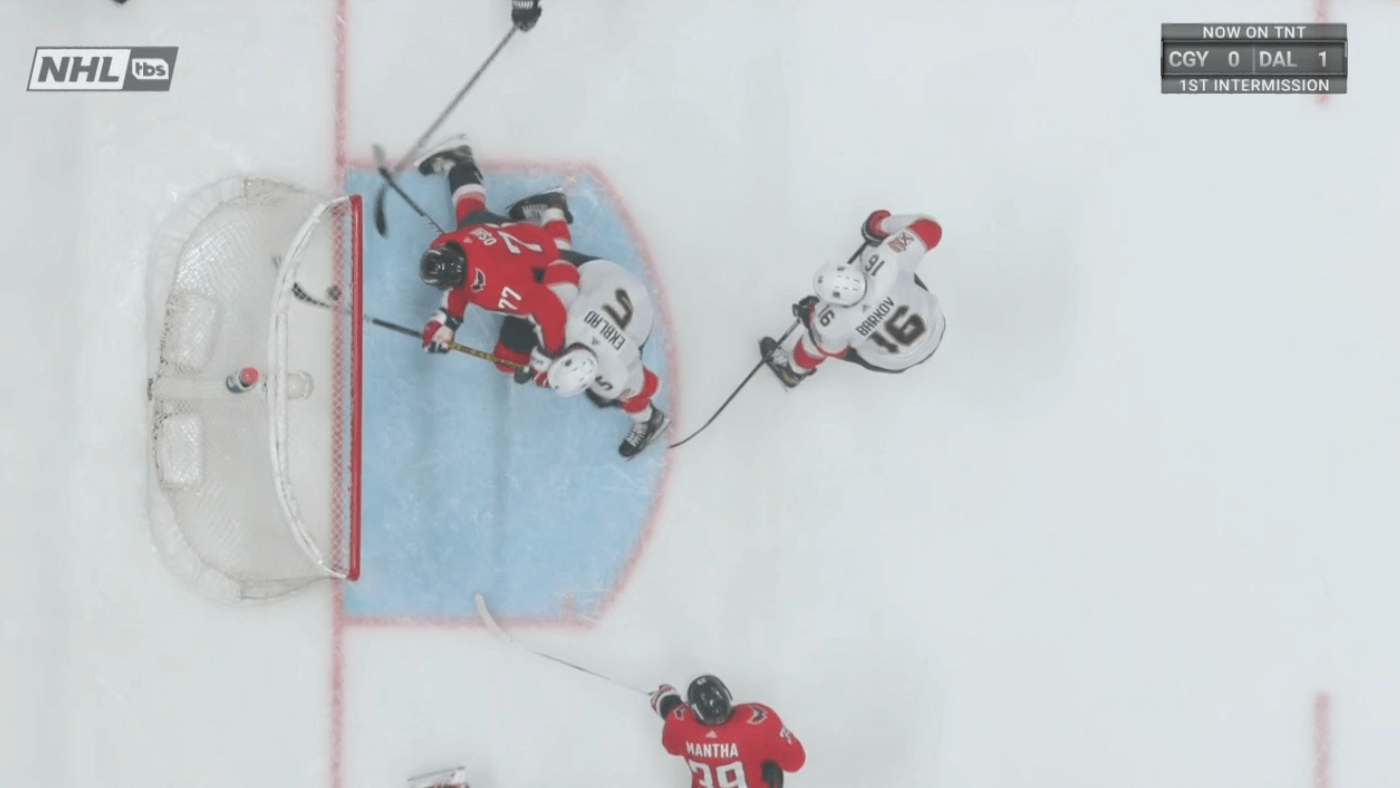 Almost completely out of the frame of the overhead camera! If you look closely, you can see his skate all the way at the bottom just as the puck crossed the goal line. As much as he helped the Panthers get here to the playoffs, there are rightfully going to be questions about his postseason play until he shuts everyone up with an outright stellar string of games.

That could have sucked the life right out of the Panthers and allowed the Capitals to pull even to force a Game 7. As much as some of us have doubted this Washington team, we know this is a seasoned group that knows what it takes to win it all — and that could have taken hold with some clutch play when it matters most. But Florida bounced back and managed to end this in six.

Who was the guy?: Roope Hintz opened up the scoring and set the tone for his team, even though the first period wasn’t ideal (hang on, we’ll get there). He also earned the primary helper on the empty-netter (we’ll get there too). Along with two points, the center kept the ice tilted for the Stars with a five-on-five shot attempt advantage of 23-11 and just under 60 percent of the expected goal share. Also impressive is that Hintz matched up against the Flames’ number one defense pair — Rasmus Andersson and Noah Hanifin for over seven minutes of five-on-five play. In that time, the shot attempts were 14-5 for the Stars.

What was the key?: The Flames generated 2.01 expected goals for in all situations in that first period, according to Natural Stat Trick, compared to Dallas’ 0.46. So even though Dallas had a 1-0 lead, there was no way they’d be able to continue for two more periods at that rate. The Stars elevated their game and built on their lead — outshooting Calgary 29-15 in the second period at five-on-five and generating 68 percent of the expected goal share. With the way the Stars’ power play has gone as of late, that even-strength play was key. And they were able to maintain that edge in the third period, below the surface, while adding to the scoresheet to solidify their lead.

Key stat: Jake Oettinger continues to give his team a chance to win throughout this series. Last night, he faced 54 unblocked shots, 38 of which went on net. With 36 saves, he stopped 1.08 goals above expected. That exceeds the final goal differential (when subtracting the Stars’ empty-netter), and qualifies as a stolen win.

The moment it was over: The Miro Heiskanen go-ahead goal, which ended up as the game winner solidified this win for the Stars, and ultimately is what forced a Game 7. Dallas was leading 2-0 and the Flames were able to even the score within minutes in the second period. At that point, the Stars could have folded and let the favorite take over, end the series, and move on to Round 2. But the Heiskanen goal was exactly what this team needed before that second period ended. Even better that it was the second even-strength goal of the game that was scored without the Stars’ top line on the ice.

The moment of the game: Roope Hintz has had a strong year and it’s showing on the scoresheet. As much pressure as there is on everyone in Dallas, it’s not as tough on him as say, Tyler Seguin who hasn’t been playing up to expectations. Hintz was unselfish on the empty net goal, as he set up Seguin to score his second of the postseason. Seguin needed that score more than Hintz.

Flames Worry Meter: 🤯🤯🤯🤯🤯 … The Flames, in front of Jacob Markstrom’s net, haven’t consistently played up to expectations and now they‘re going to face elimination in Game 7 after not closing out the series when they had the chance. 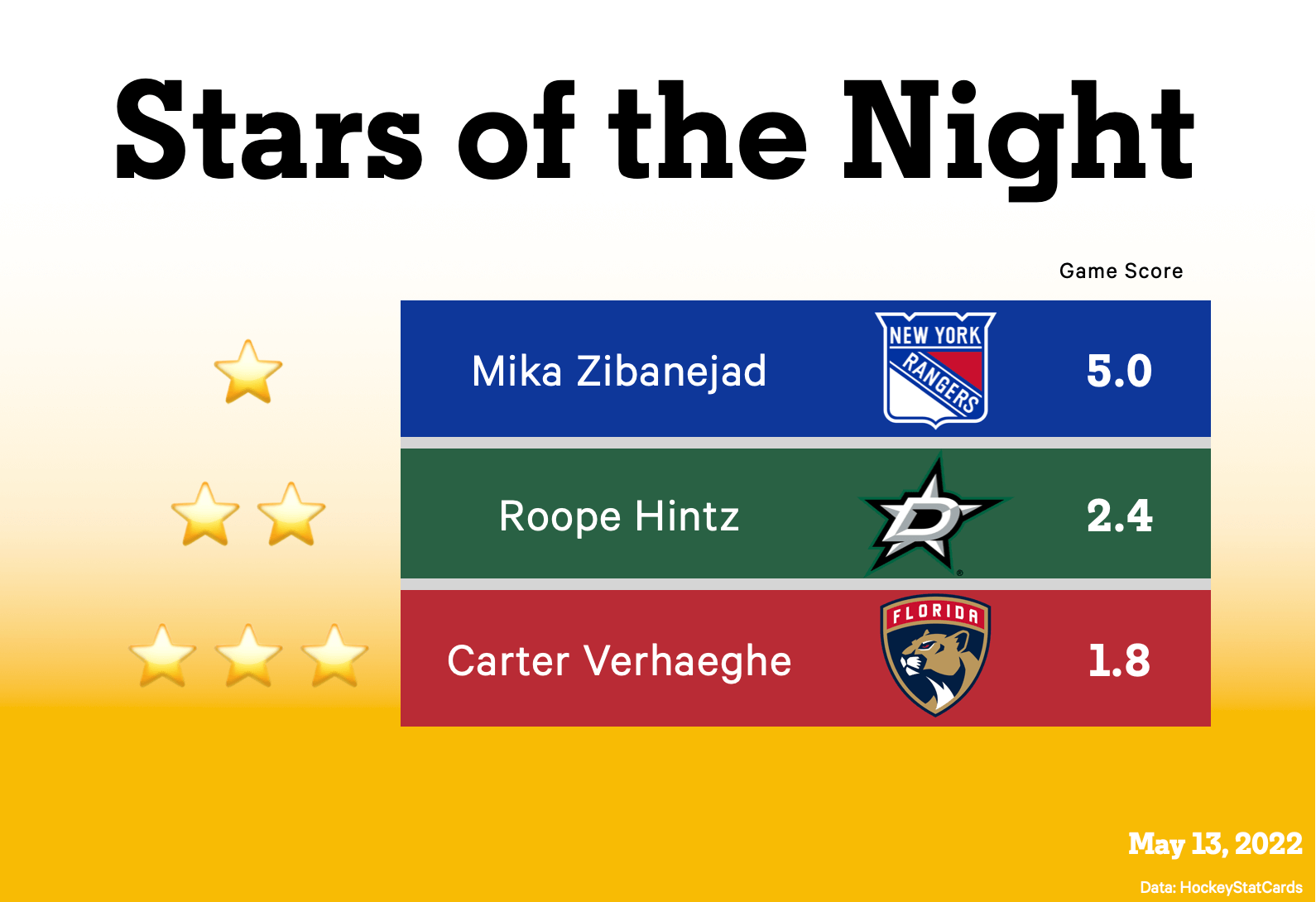 On tap for Saturday